I have been involved in athletics my whole life, whether it was playing at a young age and into college or coaching. Coaching is something I will never be able to give up. Coaching allows me to build and develop relationships with students in a way that is different than I can as a classroom teacher or administrator.

I took over the boys basketball program at Bluffton School this past year. I coached a grade 6/7 team and a 8/9 that played in two different leagues. With no assistant coach it made for some long weeks as we would practice or play Monday to Thursday with Friday and Saturday being a tournament for one the teams.  With eight tournament between the two teams it is nice that I have a forgiving wife who understands the commitment. The time spent with those students and parents helps me to build relationships that I wouldn’t trade for anything.

I coached the grade 9 boys at Lacombe Jr. High my first year and enjoyed every minute of it.  I moved down to coach a grade 7 team and a grade 8 team in the two years following.  While coaching two teams was a little tough at times, with the help of a great assistant coach we made it work. We generally get 30 – 40 students out from each grade for tryouts and running a team at each grade seemed like the right thing to do to build a program that lasts. 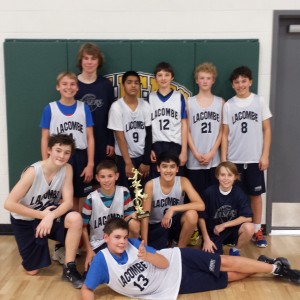 The Athletic program at Rundle Academy is something I am very proud of.  Prior to coming to Wolf Creek I had pleasure of starting an athletic program at Rundle Academy and joined the Calgary Independent Schools Athletic Association with a couple teams and few athletes.  I acting as Athletic Director for the first eight years of the program and enjoyed watching it grow and become the comprehensive and competitive program it is today.  Over the years I coached junior high boys and girls volleyball, track and field at both senior and junior high, senior high girls volleyball,  junior high and senior high boys basketball and helped out as the running backs coach the first couple years of the football program.  In 2007 I was presented with the Rundle Academy Legacy Award for my contribution to the Athletic Program.

Click on one of the pictures below to view as a slide show.

I am strong believer in the benefits of being a networked educational leader and teacher. I hope to inspire staff and students to achieve their dreams and to be life long learners.

Principal and strong believer in the power of online collaboration and learning.

Portrait of a 21st Century School